Vincent Van Gogh’s sister Anna lived and worked in Welwyn, (Miss Applegarth’s School in Forge Lane) and her brother walked a 100-mile journey to visit her here in June 1876 and there are plaques in the village to commemorate that journey. 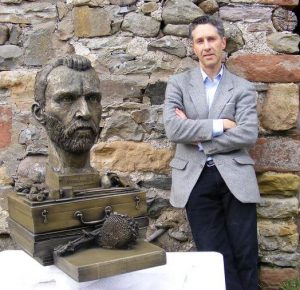 But the Welwyn Invitation almost went off the rails because Mr Padgett’s email to our local Councillors went without acknowledgement or reply!

Thankfully the Chairman of the Welwyn Garden City Society, Will Davis, recognised that the historical connection was in fact with Welwyn village and, after contacting WPAG’s Project Manager Sandra Kyriakides and receiving an emphatic assurance of our interest, he immediately gave Anthony Padgett contact details for Sandra and the Welwyn Plannng & Amenity Group.

The Sculptor and his Project

During 2017, Mr Padgett  studied the legacy of Van Gogh, then created a  sculpture and 67 oil paintings to parallel and contrast Van  Gogh’s life with his own.

The key work of the project was an award winning sculpture based on a detailed analysis of all Van Gogh’s self-portraits.  Everyone has an idea of what Van Gogh looked like although all the many images of him differ.  Anthony Padgett attempts to balance many of the different elements.  The sculpture has been praised by the Van Gogh Museum in Amsterdam as “very remarkable indeed.”

From then on, it has been “All Systems Go” and the official unveiling ceremony of the Van Gogh bust will take place on Saturday 30th June 2018

Welwyn is extremely fortunate to have such an appropriate sculpture to add to its many Heritage sites of public interest.

The ceremony commences at 1030 am followed by a Reception at the Civic Centre hosted by the Welwyn Parish Council.

The ceremony for the unveiling of the Van Gogh sculpture by Mrs Marion Brown MBE JP Deputy Lord Lieutenant of Hertfordshire will take place on Saturday 30th June 2018.

The ceremony will begin from at 10.30am at the ford area of the River Mimram in the High Street (in front of the Bridge Cottage Surgery opposite the High Street Car Park), where the Chairman of Welwyn Parish Council, Cllr Bill Morris, will say a few words, followed by the artist, Anthony Padgett.

The official ceremony will take place at 11am when Mrs Marion Brown will officially unveil the sculpture.

Following the ceremony, everyone is invited to move to the Civic Centre in Prospect Place for refreshments and an opportunity to view up close a copy of the sculpture.

The sculpture has been donated by the artist Anthony Padgett who has made a number of cold-cast busts of Vincent Van Gogh which he has donated to areas associated with the artist life (including Belgium, France and England). In 1876 Van Gogh walked 100 miles from Ramsgate to Welwyn to visit his sister Anna who lived in the village.