1st Welwyn Scout Group are a Foundation Troop, formed in 1908 when Baden Powell founded the world wide organisation that now has 500,000 members in the UK and 30 million members in 150 countries world wide. It is recognised by the United Nations as the largest youth organisation in the world

1st Welwyn Scout Group have met continuously since 1908, including through both world wars, and have had three homes in that time:

The Need for a New HQ

The concrete Banbury frame building with asbestos roof in Lockley’s Drive was built for the princely sum of £7,500, and extended at the rear in 1971 with further Banbury materials erected by volunteers. But over a period of 15-20 years, whilst various other options were explored, little was spent on the building and it was deteriorating at an alarming rate. Plans were drawn up to move to a new building to be constructed in White Hill car park at an estimated cost of £500,000, and an alternative option of re-building on the existing site was estimated at £200-250,000. But these plans did not reach fruition because of funding shortages.

Then, in 2012, the existing building had to be closed anyway, due to extensive penetrating damp from a lack of roof drainage in the 1971 extension, and 300mm or more of leaf mold and earth that had accumulated on the north face of the building, creating a “reservoir” of water which eventually found its way into the whole building.

It was decided that the only realistic way forward was to refurbish the building.

That Banbury building, except for the roof, forms the “inner core” of the “new” HQ, which at first glance looks to be a completely new structure.

As part of the main contract, the asbestos roof was replaced with a steel and insulation “sandwich”, the outer walls had 200mm of insulation and a coloured poly/concrete render added to the exterior. Interior wall coverings were replaced with modern cavity wall plaster board. 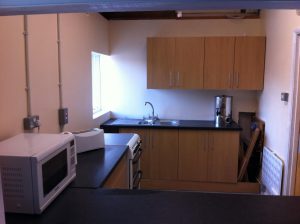 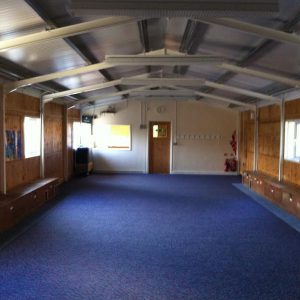 All plumbing and wiring was replaced, and double glazed windows, new toilets, including a disabled toilet, a new kitchen and floor coverings were provided.

Earlier the main hall had been lined with tongued and grooved boarding, which was retained as it gives the hall an attractive welcoming feel.

Apart from the Scout Group, users now include the over ’60’s Friendship Club, Welwyn Wailers, kids and adult yoga, keep fit, and watercolour classes. Birthday parties have been held there and a local band and a drama group for kids are also considering starting meetings in the property

Before refurbishment started available funds from many public and private bodies and individuals stood at £70,000 and the Lottery Fund added £20,000. One benefactor donated a further £10,000 during the work.

Tesco, Netherdown Developments, EDF Energy and GSK provided materials and/or gave labour free to the tune of another £30-40,000 to allow us to provide the wonderful building we are all enjoying today.

New CCTV, fire detection and security systems as well as wifi, have also been fitted with the assistance and cooperation of Bill Morris, the Welwyn Parish Council Chairman, and funding from County Council Chairman Richard Smith.

Netherdown Developments and CSS groundworks contractors have installed the new access and disabled ramp, part funded by a grant from the Gibson Trust.

We have also recently received £10,000 in a Lottery Fund “Awards for All” grant, which has bought a new cooker and fridge, and tables and chairs, and will buy racking and new cupboards, as well as new camping equipment.

The final piece of good news came from the landlord, (Welwyn Hatfield Borough Council), who offered us a new lease at a low rent right through to 2137, thus securing the future of the Group well into the next century

During the period of refurbishment, from 2012 – 2014, Scouts and cubs moved out to share meetings with their counterparts in Codicote, and the beavers moved to New Church House.

Not surprisingly, due to this disruption and the absence of an active Group based in Welwyn for almost three years, numbers declined to around 25, from a previous high point of over 200 a decade before.

But on completion of the work and the subsequent return of the Group to their own HQ in October 2014, membership started to recover and now stands at 80, with beavers, cubs, brownies and scouts meeting in the building. But new leaders and helpers are urgently needed.

The hall has been named in memory of Derek Nash, a former Group Scout Leader, who led the fund raising efforts for over 20 years

Derek Nash was a truly inspirational man who dedicated 30 of his 57 years promoting scouting in Welwyn, Welwyn Garden City and Codicote. Derek exemplified what a scout should be, helping thousands of young people to stretch themselves, to build a caring attitude to their fellow scouts and the community – in Welwyn, in Hertfordshire, the UK, USA and Russia. Under his leadership the 1st Welwyn Group was the largest in the District. 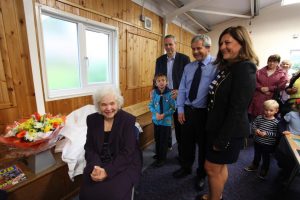 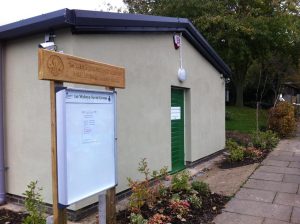 Members of Derek Nash’s family “cut the ribbon” to officially open the new Derek Nash Scout HQ on 4th October 2014 and the Scout Group’s war memorial to scouts killed in the two world wars was rededicated.

For more information about ‘how you could help’, and all details about hiring the Hall, please contact: