AFFINITY WATER ABSTRACTION FROM THE MIMRAM NEAR WELWYN VILLAGE

WPAG’s Project Manager has maintained regular contact with the Environment Agency (EA) in order to keep updated on progress in relation to the Affinity Water abstraction near Welwyn Village.

The EA wrote to WPAG in March 2017, informing us about the interim operating agreement for the pumping station agreed by the EA with Affinity Water.  This agreement was to be in place while searching for a solution to any increase in flood risk caused by permanently ceasing abstraction at the pumping station.

The agreement made a provision to maintain a small constant abstraction with the option to increase abstraction back up to 2016 levels if groundwater reached a certain level (agreed at 95.8 Metres above Ordnance Datum (mAOD)). 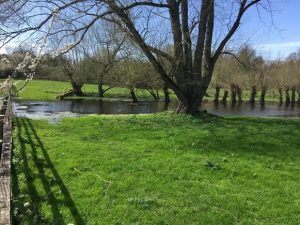 this is because of persistent rainfall since the start of 2018 and the subsequent rise in groundwater levels.

Groundwater levels at Lilley Bottom observation borehole are currently around 95 mAOD and have been rising steadily since the start of the year.  However, given that we are at the end of the colder wetter months when groundwater recharge usually occurs, it is unlikely that groundwater levels will rise to the 95.8 mAOD trigger level in the next six months.  In most years the peak groundwater level is reached in April or May and then falls through summer and autumn.

The EA are still working on their flood risk model for the Mimram catchment. This has taken far longer than expected due to a number of complications and resourcing issues. This work is now nearing completion and WPAG expects to receive an update later this year.

It was always anticipated that the North end of Singlers Marsh would flood during the wet months and this has not given undue cause for concern.  It will be interesting to see whether the lower rate abstraction will have any effect on the Mimram at the Southern end of Singlers Marsh.  Memories of the dried out river bed and the loss of wildlife still remain and the area is only just beginning to recover to the state it was prior to that.

With regard to the Affinity Water Draft WATER Resources Management Plan 2020-2080  consultation 19 MARCH – 23 MAY/Draft BUSINESS Plan 2020-2025 Public consultation 26th APR – 25th MAY,  concern has been expressed to WPAG by wildlife society members that Affinity may be trying to renege on their agreement with the EA to reduce abstraction. This obviously relates to the wider catchment areas of the River Mimram and other chalk streams.

WPAG’s Project Manager asked the EA for comment on these concerns.  Their response was:

We have reviewed Affinity Water’s draft Water Resources Management Plan and provided our advice to the company. The plan put forward two options for the level of abstraction reductions that will be carried out between 2020 and 2025. Our understanding is that both of these options include the previously agreed abstraction reduction for the Mimram.

One of the options did include a lower level of abstraction reduction for some other rivers in the Affinity Water operating area. Our advice to the company was to go with the plan that has the previously agreed level of abstraction reduction for all rivers. The company will provide a statement of response this summer to indicate how they have taken this advice and that of other respondents to the consultation on board.

The EA will advise WPAG when the statement from Affinity Water becomes available and further relevant information will be posted on the WPAG website in due course.